Regions are an organized areas of the Pokémon world known from previous games about Pokémon such as games from core series. In Pokémon GO there are currently only three regions referred, which are Kanto, Johto and Hoenn.

The Pokémon known from Kanto region were the base Pokémon released in Pokémon GO, but not all Pokémon of this region were released at one time.

Johto is the second region from which Pokémon are available in Pokémon GO. The Pokémon from this region were firstly released in December, 2016 as Baby Pokémon available to hatch from Pokémon Eggs.

There are currently only two Pokémon, that are still not available nor officially scheduled to be released and they are Smeargle and Celebi.

Hoenn is the third region from original core series of which Pokémon are now available in Pokémon GO. Selected Pokémon from this region were mostly released in 5 waves:

Listed waves don't include Hoenn-region Legendary Pokémon that were temporally released as Raid Bosses. Currently there are 15 Pokémon that are yet to be released. 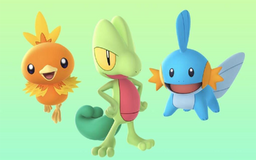 Banner with Hoenn Pokémon from Pokemon.com