View source
watch 02:52
Roblox: DeepWoken - The Loop
Do you like this video?
Play Sound

No
Tyrogue is a Fighting-type Baby Pokémon from the Johto region. It evolves into either Hitmonlee, Hitmonchan or Hitmontop when fed 25 candies.

Scuffle Pokémon
Tyrogue becomes stressed out if it does not get to train every day. When raising this Pokémon, the Trainer must establish and uphold various training methods.
► - Tyrogue's cry

Tyrogue is part of a four-member family. 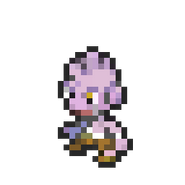