Not Very Effective against ?

Thunderbolt is an Electric-type charged attack.

Pokémon with this attack

The following Pokémon are currently able to learn this attack. 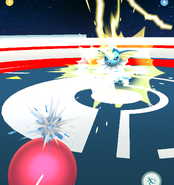 Retrieved from "https://pokemongo.fandom.com/wiki/Thunderbolt?oldid=60093"
Community content is available under CC-BY-SA unless otherwise noted.