Team GO Rocket Invasion is a feature in Pokémon GO introduces Team GO Rocket and Shadow Pokémon. Team Leaders and Professor Willow have observed Team GO Rocket members hanging out at discolored PokéStops. It appears they are after the PokéStops' resources. This feature is only available to Trainers who are Level 8 and above.[1][2]

The invaded PokéStops have a different appearance than regular PokéStops in the Map View. These PokéStops twitch and appear discolored.

Once you spin the photo disc and the Grunt speaks to you, it is safe to move away from the PokéStop if you are confident you can defeat the Grunt in one attempt. You are free to keep walking to your other destinations while you battle the Grunt and capture the Shadow Pokémon, unlike with gym battles which require you to be in range for the whole time.

All trainers see the same invasions, but turning them normal is instanced for each player. All trainers face the same Shadow Pokémon, but their Combat Power is scaled to the trainer's level, making the battle challenging to all players.

An battle encounter begins when a Trainer interacts with a Team GO Rocket Grunt. Team GO Rocket Battles work similarly to Trainer Battles (with the notable exception of not returning your Pokémon to full health after the battle).

Select a party of three Pokémon and use their Fast and Charged Attacks to defeat the opponent’s Shadow Pokémon. After winning a Team GO Rocket Battle, 500 Stardust and a Mysterious Component will be rewarded and there will be a chance to catch one of the Shadow Pokémon they have left behind. If the battle is lost, a rematch will be offered. Winning Team GO Rocket Battles also increases the rank of the Hero medal.

Before entering the battle, the Grunt would say a line that hints at a certain type. This means there is at least one Pokémon of that type on their team (often 2 or 3), but the Pokémon available for capture (usually the first) is not necessarily of the type.

Enemy Shadow Pokémon fought in Team GO Rocket Battles have greatly increased CP above normal limits. It appears their strength is offensive-biased, meaning they can dish out quite a lot of damage but does not take hits as well as their CP suggests.

Catch and Purify the Shadow Pokémon

After a successful battle, there will be an opportunity to catch a Shadow Pokémon that Team GO Rocket abandoned. Shadow Pokémon cannot be traded away by the Trainer who rescued them unless they are purified first. Purification help Shadow Pokémon return to a more normal state, but Purified Pokémon can also become stronger and require less resources to power up. 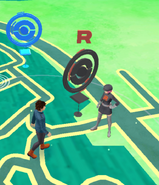 Retrieved from "https://pokemongo.fandom.com/wiki/Team_GO_Rocket_Invasion?oldid=63100"
Community content is available under CC-BY-SA unless otherwise noted.