No
Solrock is a Rock, Psychic-type region-exclusive Pokémon from the Hoenn region. It does not evolve into or from any other Pokémon.

Meteorite Pokémon
Solrock is a new species of Pokémon that is said to have fallen from space. It floats in air and moves silently. In battle, this Pokémon releases intensely bright light.
► - Solrock's cry

Solrock is part of a one-member family. 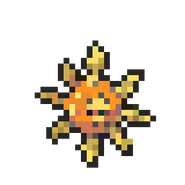