Shiny Pokémon are extremely rare Pokémon that differ in coloration from their regular appearance. These color variations may range from minor hue adjustments to completely altered palettes. Only one shiny variation exists for each Pokémon.

In the Map View and Sightings view, Shiny Pokémon are shown in their regular coloration until they appear on the encounter screen or on the summary page, where they have an aura of stars around them, a shiny tab shown above the CP and their different coloration is visible.

The in-game RNG determines if wild-spawned and Raid Pokémon are Shiny for each player's instance separately; thus a Shiny Pokémon from the same spawn point may not, and most likely will not, appear shiny to other Trainers.

Once a player captures 10 Shiny (non-Shadow) Pokémon, they will unlock the Shiny Pokédex so they can see each entry of Shiny Pokémon they have seen/caught. Shiny Shadow Pokémon are registered to the Shadow Pokédex, which has additional switch buttons for shiny forms for eligible Pokédex entries.

Only Shadow Pokémon obtained from the three Rocket Leaders or Jessie and James are able to be shiny. Those obtained from Grunts or Giovanni cannot be shiny, with a few exceptions.

Odds of a Shiny Pokémon

According to the latest research conducted by TheSilphRoad[1], there are several likely categories that determine the odds of a Pokémon being Shiny.

Note: the following numbers are from their most recent estimates. 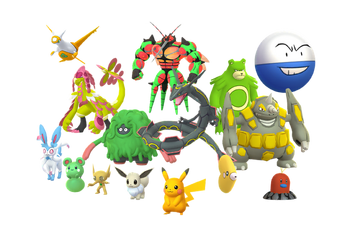 Almost all Shiny forms of Pokémon are currently in game assets, but only part of them are currently available to obtain by players in the gameplay.

For comparison of regular and shiny sprites of Pokémon, see here: List of Shiny Pokémon comparison

Some Pokémon can only be obtained in their Shiny form for a limited time, after which they cannot be obtained again until either a new event occurs or they are made permanently available.

All Shiny Shadow/Purified Pokémon falls in this category, as they can only be obtained as the reward from defeating a Team GO Rocket Leader or Jessie and James (not Giovanni or any Grunts) and the Leaders' teams change every few months (or in the case of Jessie/James they simply stop being available), making obtaining that particular form unobtainable for the time being.