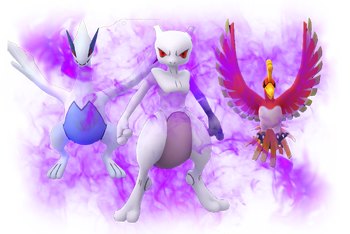 Shadow Pokémon are mysterious Pokémon that Team GO Rocket Grunts and Leaders leave behind after they lose the battle. They are distinguished from normal Pokémon by a burning purple aura, glowing red eyes and often more menacing expression. Shadow Pokémon can be cured by purifying them to become Purified Pokémon with Stardust and Candy. All Shadow Pokémon that are captured will know the attack Frustration. This feature is only available to Trainers who are Level 8 and above.[1]

In order to obtain Shadow Pokémon, Trainer has to defeat any member of Team GO Rocket (including Grunts, Leaders or Giovanni) and participate in a Rescue Shadow Pokémon challenge that is similar to the Bonus Challenge in Raid Battles.

When attempting to capture Shadow Pokémon, they attack far more often than normal, making themselves especially hard to catch. A Nanab Berry can be helpful with this. Also, while Shadow Pokémon often have a deep orange or even red ring (even for common, low-level Pokémon), it seems to be misleading, as the capture rate is not as low as the capture circle implies.

Purifying a Shadow Pokémon have the following effects:

Purifying a Shadow Pokémon increases the rank of the Purifier medal. The Pokémon's dark aura will also change to a bright, luminous aura.[1] Purified Pokémon require a Special Trade while Shadow Pokémon cannot be traded.

The following table shows the multipliers for powering-up, evolving, or adding a second attack to Pokémon.[2] The Stardust cost reduction stacks multiplicatively with Lucky Pokémon (-50% cost); a Pokémon that is both Lucky and Purified costs 45% the normal amount of Stardust to power up.

Shadow bonus applies to all Gym, Raid and Trainer Battles. The attack bonus can be stacked with weather bonus.

The cost of Power Up and the second Charged Attack requires less Stardust and Candy. The multiplier went from 3 to 1.2.