Yes
Porygon is a Normal-type Pokémon from the Kanto region. It evolves into Porygon2 when fed 25 candies and given an Up-Grade and its final evolution is Porygon-Z.

Virtual Pokémon
Porygon is capable of reverting itself entirely back to program data and entering cyberspace. This Pokémon is copy protected so it cannot be duplicated by copying.
► - Porygon's cry

Porygon is part of a three-member family. 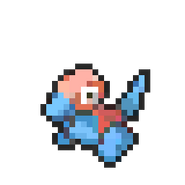