View source
watch 02:59
Wiki Targeted (Games)
Do you like this video?
Play Sound

Chester Heritage Festival
Pokémon GO Fest in 2017 was the first GO Fest event in Pokémon GO. There were challenges for both attendees and Trainers around the world.

The event featured the region-exclusive Pokémon Heracross. There were A, C, G, H, I and O forms of Unown spawning very frequently at the event. These letters spell "Chicago" - location of the event.

As a result of all the hard work put in during Pokémon GO Fest, plenty of in-game bonuses was unlocked for the entire Pokémon GO community.[1]

Based on the efforts of the Trainers at the event, Lugia was revealed as the first Legendary Pokémon to appear in Pokémon GO. In addition, since Team Mystic captured the most Pokémon during the event, Articuno joined Lugia in Raid Battles immediately upon completing the challenge.

The other two Legendary Birds - Moltres and Zapdos, were also unlocked, but they would be available in the latter weeks. [2]

There were numerous networking and connectivity issues present, during the event. Many Trainers could not log into their accounts during the event. The game's CEO, John Hanke, was booed on stage for the frustration. Because of these issues, all attendees were refunded their admission cost, received $100 in Shop credit and given a free Lugia.[4][2] 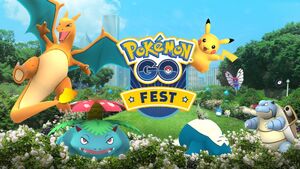 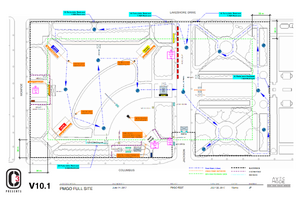