< Pokémon GO
View source
watch 02:52
Roblox: DeepWoken - The Loop
Do you like this video?
Play Sound

In the game there are and were several more and less known technical issues such as bugs and glitches.

There are currently some minor issues acknowledged by Niantic on their support page. They sometimes offer some possible solutions to these issues until they fix them in the game.

There happens to be a lot of different kinds of visual and graphic issues that are mostly caused by solely game's client app. There were noted several graphic issues with user interface, rendering of models and elements in the Map View.

The visual issues of user interface include:

There are sometimes glitches strictly related to rendering of 3D models in the game. Such models are used for Trainer's avatar, NPCs, Pokémon seen in most of game features (encounter screen, Pokémon summary page, Gym and battles) and items such as PokéBalls in encounter screen.

In early versions of the game, there was a common rendering glitch in Unity engine. It occurred to models of Pokémon that involved rendering their entire bodies fully black excluding their eyes, as these were using different textures because of facial expressions of Pokémon (such as blinking). Thus Pokémon, that were faultily rendered that way, were dubbed by a player community "Ninja Pokémon" as they were resembling Ninja warriors with their bodies fully black and only eyes visible. This glitch could happen to any Pokémon model in game, including already captured Pokémon as well as wild Pokémon.

This glitch might also happen to a Trainer's avatar model, with only their eyes or belt showing up, as it would be on a separate layer.

At one time, during initial game release, there was another Unity model rendering glitch where Poké Ball's model in the encounter screen would merge with a Rattata's model. Due to this render issue, either Rattata would have distorted model with Poké Ball material and texture on it or Poké Ball would have Rattata's textures and materials on its model. This issue was patched out soon after it was commonly reported.[1]

Sometimes, more than one Pokemon may be displayed rotating above the Gym and overlapping through each other.

There was also a common model rendering glitch in the Map View, that would cause a giant leg of Trainer's avatar to appear on the map, mainly after closing the style and appearance customisation menu. Sometimes, the game would still continue working but the giant duplicate model of the Trainer's avatar would be present in the Map View performing same animations as its proper, smaller counterpart. To get rid off such glitch, most common way was to restart the game app.

Another Map View glitch would cause the point of view to be locked at the one, recent Trainer's location and the Avatar's model would seemingly walk away as the player changes their location, in such case game would be unable to play as the Map View got locked on the one certain location and the game app would have to be restarted in order for further gameplay.

At times, there would be also a wild Pokémon or Buddy Pokémon rendering glitch that would render a tiny model of such Pokémon on the map nearby to Trainer's Avatar. Such model would perform regular animations however it would not be interactive.

Occasionally, there are several issues with localisation service which happen to be inaccurate, unavailable (despite the Location/GPS is turned on in the mobile device) or drifts (moves player around the nearby area despite them not moving).

Due to such localisation issues, players might have difficulties with some basic in-game actions, as:

GPS drifting is rather annoying for player as it causes the speed limit exceeded notice to appear while player is moving within limit or even not moving at all.

This issue became a meme in the player community for its ridiculousness of exceeding speed limit while sitting or laying with no actual movement. However, some players find a advantage of this issue, because when player does not move (e.g. staying home) and the game is on with GPS drifting, there is sometimes distance for Buddy Pokémon and incubated Eggs counted as if it was walked, which can lead to Egg hatching or Buddy finding a candy without player getting from home at all.

In general, GPS accuracy largely depends on the device players are using and the signal/connection strength. Following settings are suggested to be reviewed by players to improve the device's location:

Pokémon in the wild issues

There happen to be various issues and bugs with Pokémon tracking and catching in both Map View screen and encounter screen. Most of these issues is caused by either not completely synchronised data between game client and Niantic servers or client-sided not-responding.

There are some issues with PokéStops spinning and receiving items from them as well.

One of which is that player that is moving below speed limit, when spinning active PokéStop, may get notice "Try again later." as if there was still cooldown on PokéStop or player exceeded speed limit. However, items are received (can be seen in Item Bag and Journal) and PokéStop turns purple after the game client refreshes data or connection with network – most of the time it can be triggered when player performs any other action in the game or simply restarts the game itself.

Sometimes, viewing a PokéStop in player's range will not cause the cube on top of the PokéStop to open into the Photo Disc, it can be considered as either a data synchronisation issue or a visual glitch.

Another common issues along the model rendering and localisation issues, are server conectivity issues, which may occur if there is a network connection temporal loss or the game app client do not appropriately refreshes game data between client and servers.

A common issue that would occur mainly at the very beginning or very end of specific game events would replace already captured wild Pokémon with another one in the Trainer's Pokémon collection. This issue would be caused by connectivity issue between game app client and servers, as player would have an illusory access to the Pokémon featured in the event after its end.

This issue would also cause some shiny Pokémon to become not shiny, due to temporally boosted rate of Shiny Pokémon in the event, that would be decreased once event concludes.

Sometimes after purchasing PokéCoins, they would not appear in Trainer's balance at first. They may, however, appear after longer while but if not, Trainer needs to sign out from their account and log in again.

If player's mobile device loses internet connectivity while purchasing PokéCoins or other premium items from the shop, “You already own this item” error message may appear. However, these items or PokéCoins should be added to Trainer's account after a while, but if not player needs to restart the game or sign out and log back in with their account.

Sometimes when fighting a Pokémon that defended a Gym, the opposing Pokémon couldn't be reduced below 1HP and continues to damage each and every attackers Trainer's Pokémon in process. If Trainer would run away or were defeated, all of Trainer's Pokémon would be at full HP as if they had never entered the combat.

Trainer progress would temporarily reset to Level 1, due to connectivity issues between Pokémon GO app client and servers.

Most problematic issue, that tend to occur at the very beginning of the initial release of Pokémon GO, back in July 2016, was a server issue. Due to vast number of players playing globally, sometimes servers would get down and following screen message would appear once player tried to log in to the game.

Some devices may experience battery drain while playing Pokémon GO for prolonged periods of time, due to use of GPS and 3G, 4G or Wi-Fi.

There would be a couple of text and translation issues across past years in Pokémon GO.

Sometimes, the issue revolve around not displaying technical code line, such as quest_catch_special0_plural instead of proper text line.

After introducing information about the place and time of obtained Pokémon Eggs to the screen with detail view, for a short time period it was showing the date "May 15, 2016". Only the date was glitched as the area of PokéStop that the Egg came from was correct.

When the Special Research tasks campaign – A Mythical Discovery first came out, sometimes the tasks header title would read "???" instead of "A Mythical Discovery (N/8)." If player clicked into Professor Willow's dialogue, it would have Professor Willow just sitting there playing his animation, but not speaking. After a while of waiting for him to talk, the game client would crash.

In some situations, music and sound effects within Pokémon GO app may become distorted or delayed. This issue often occured while connected to Bluetooth audio.

Back in 2016, the game app client on Android would continuously volume down or even turn off background music including one from music players while playing Pokémon GO. This issue was resolved with latter updates in 2016.

There were several other historical issues that were common back in early days of release of either Pokémon GO or its new game features.

Players might have inadvertently created two Pokémon GO accounts: one account using Google and one using Pokémon Trainer Club. If player creates an account with one login method and later attempts to use the other login method, a second account is created. To resolve this issue, player needs log out of the newly created account via the Settings menu and then log back in with the original login method.

After the game initial release, there used to be a bug where Trainer could deploy a Pokémon Egg in a Gym. It would have 0 HP and dealt no damage, however, it was impossible to defeat.[2]

Immediately after the release of Lucky Pokémon feature on July 25th, 2018 12:00PM PST[3] traded Pokémon that became lucky had no IV floor, and 0-IV lucky pokemon could be obtained.[4] This was surprising to players, since these trades were ignoring the IV floor from friendship level. This bug was resolved around 2:00PM PST the same day[5], and Lucky Pokémon obtained after this point in time began to have an IV floor of 10/10/10.

There was a glitch that would make a large Substitute model appear on top of a Gym. There has been never revealed what would be a reasoning behind this happening. Multiple players had reported seeing the Substitute appear, and when they clicked on it — it caused their game to either freeze or crash.[6]

A Substitute appears in the main series of the Pokémon games, when a Pokémon uses the move by the same name. However, it is still unknown why Substitute was initially implemented to the game including its data and model.

In 2018, there was a common issues when entering an encounter screen of wild Pokémon. The Pokémon would appear to have a berry currently used on it, even thought it should not. The berry that appeared was a "hang-over" from the last usage of a berry on a prior Pokémon encounters. This was reportedly fixed on August 7th, 2018 (version 0.111.4).[7]

Starting on August 7th, after fixing this glitch another Berries-related bug could occur that resulted in a game crashing. Such issue occurred when player left encounter screen after giving wild Pokémon a Berry and then approached the same Pokémon again.[8] 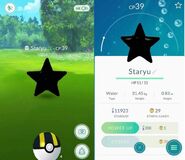 Another Trainer's avatar model rendering failure in the Map View 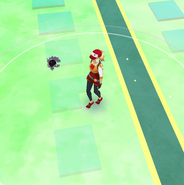 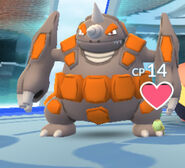 Models of Rhyperior overlapping with a Turtwig's in a Gym

Shiny Meowth model rendered instead of regular even if not selected nor available.