< Pokémon GO
View source
watch 02:46
The Quarry - The Loop
Do you like this video?
Play Sound

There are a few game features that were implemented by the creators but not revealed by them, which are called Easter Eggs.

Pikachu is the most popular and iconic Pokémon in the game.

But there are also a few less noticeable features in game related to Pikachu, such as:

One of the most well-known Easter eggs in Pokémon GO is the possibility of getting a Pikachu as a Starter Pokémon, just like Ash Ketchum did in the anime.

At the start of a player's journey, Professor Willow gives the new player an introduction to the game and Pokémon, then the new trainer is given the task to capture a starter. The three starters from the Kanto region appear - Bulbasaur, Charmander, and Squirtle.

If the player wants Pikachu, then they have to walk away from these three to make them disappear and re-spawn again next to the trainer at their current location. Players have to repeat this action 5 times until Pikachu shows up along with the previous three Starter Pokémon.

If a Pokémon is tapped while looking at its summary page, it uses its charge attack animation and its anime cry can be heard. Pikachu is the only Pokémon that says its name, just as it does in the anime series.

Initially when a Pikachu is assigned as a Buddy Pokémon, it will show up on the ground beside the trainer. However, if a trainer walks a distance of 10km or more, the Pikachu will appear on top of the avatar's shoulder. This also happens with Eevee as a Buddy Pokémon.

This is most likely a reference to Ash's Pikachu always being on his shoulder.

There are plenty other Buddy Pokémon that also appear on the shoulder of Trainer's avatar, however these ones show up there initially not after a certain distance is walked.

The most well-known Easter egg is the Eeveelution Easter egg. In the anime episode "The Battling Eevee Brothers", there are four brothers each with a different Eeveelution.

Mikey, the youngest, has the base form Eevee, and is pressured by his brothers (Sparky, Rainer, and Pyro) to evolve Eevee to one of its different evolved forms. Sparky has Jolteon, Rainer has Vaporeon, and Pyro has Flareon.

In Pokémon GO, the trainer can nickname their Eevee with one of the three older brothers' names to get the corresponding Eeveelution. This Easter egg was confirmed by Niantic CEO John Hanke at the 2016 San Diego Comic Con.[1] However, it can only be done once for each Eeveelution.

This naming trick has been been extended to include the Johto region's Eeveelutions. In the animated series, there are five sisters called the Kimono Girls who each have a different Eeveelution — the most notable in this case being Tamao's Umbreon and Sakura's Espeon. When Umbreon and Espeon were added, the naming trick was also expanded to include Tamao and Sakura's names resulting in the corresponding Eeveelution.

Since game update 0.143.0 after naming Eevee the proper nickname, there will be respective evolution form shown on the Evolve button instead of question mark. This also includes meeting requirements for evolving Eevee into Umbreon, Espeon, Glaceon, Leafeon and Sylveon.

Therefore naming Eevee one of the following names will result in the respective Eeveelution:

Similar to Pikachu, when Eevee is assigned as a Buddy Pokémon, it will initially show up on the ground next to the trainer. However, once a trainer walks with it for at least 10 km, the Eevee will appear on top of the trainer's right shoulder. Like with Pikachu, once any Eevee has been walked 10 km, all Eevees will appear on the trainer's shoulder as a buddy. 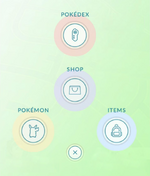 When the Main Menu Button

in the Map View is held and then player slides to each of the four icons of the menus, without lifting their finger. A colored glow temporarily appears showing orange for Pokémon, red for Pokédex, blue for Items, and purple for Shop.

Although these colors might be not significant they resemble colors of Pester Ball.

Pester Ball is a lesser known Poké Ball that made its appearance only within Pokémon Snap. In the game, the Poké Ball has the same effect as a Repel which helps the photographer take photos of Pokémon. It is also special because it has four different colors, red, orange, blue, and purple. The center of the Poké Ball is purple, then going clockwise the outer layer is divided into three equal parts of orange, red, and blue.

Also, since Pester Ball was used in Pokémon Snap to reveal a disguised Ditto, there were various rumours in player community about the connection between this Easter Egg and Ditto. After Ditto's release to the game, such speculations were left alone.

When entering a bugged summary page screen of a specific egg, some players have encountered a weird quote saying

Hatch this egg by feeding it butter. It likes all kinds of butter, every kind. The best kind.

This could be a reference to Alice in Wonderland. Some players have suspected that this quote could imply an item that is yet to be introduced and helps with egg hatching.

There are also plenty of Easter Eggs in loading screens of Pokémon GO, that rather refer to in-game features and events instead of other media in Pokémon franchise.