The Pokédex is one of the main elements of the game. It's compendium of information about every Pokémon already caught and seen by player. It becomes more complete as trainers own and encounter new Pokémon.

On the top of Pokédex page there are two player's stats, which are number of already caught and seen Pokémon.

Whole, long page of Pokédex is filled with fields for every Pokémon species in game. There are three types of such fields:

Initially not all of the number tiles appear, but only those ones up to the field of Pokémon species that has been caught or seen with the highest Pokédex number in each region.

There are different colors of tiles in each section for Pokémon species from each region:

Also each section of such Pokémon has a header line with the name of region.

There are three ways to exit from the page of Pokédex:

Pokédex entries are basically separate pages with information about specific Pokémon species. There are two kinds of these entries: complete and incomplete ones.

While complete ones has also:

Example screenshot of the incomplete Pokédex entry of Farfetch'd

Example screenshot of the complete Pokédex entry of Rhydon 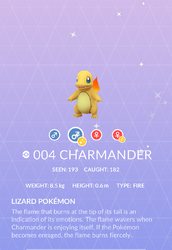 Example screenshot of the enabled shiny Pokédex entry of Charmander 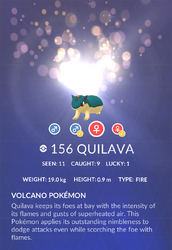 Depending on what forms of each Pokémon were caught by trainer already, respective form switches appear underneath Pokémon's 3D image.

Registering a Shiny Pokémon will also register the non-shiny form to the Pokédex, if the Pokémon was not previously registered.

If player obtained for the last time particular Pokémon of any gender sometime before December, 2016, it might cause that both gender form switches appear as Pokémon were only seen, despite the complete Pokédex entry and exact Pokémon being already in player's Pokémon collection. [1]

Switches for only-seen Pokémon forms cannot be clicked since the version 0.89.1. Therefore even if player has seen female form of Pokémon in gym or has encountered it in wild but not caught, in Pokédex only male form is seen in its complete Pokédex entry.

Below there are assets for certain groups of Pokédex entry switch buttons for each Pokémon form.

Retrieved from "https://pokemongo.fandom.com/wiki/Pok%C3%A9dex?oldid=66951"
Community content is available under CC-BY-SA unless otherwise noted.