Mega Evolution is an additional, temporary evolution form of specific Pokémon that reached their final evolution stage. They have greatly increased Combat Power, but their HP remains the same. Certain Pokémon may also change their types after being Mega Evolved.

Similarly to the main series games, Mega Evolution is temporary, however in Pokémon GO it is a temporal change of form that occurs in Trainer's Pokémon collection instead of a single battle.

Mega Evolved Pokémon can be assigned as a Buddy Pokémon and used to battle in raids and Gyms or against another Trainers and Team GO Rocket members. However, they cannot be deployed to defend Gyms, traded, powered up nor used in GO Battle League matches while Mega Evolved.

If Pokémon such as Charizard has different Mega Evolution forms, Trainer can choose into which one they want to Mega Evolve such Pokémon.

Each Mega-Evolved Pokémon for first time is registered to the Mega Pokédex.

Mega Energy is a consumable resource that is similar to Pokémon Candy, as each Pokémon species has specific Mega Energy. While a Pokémon is Mega Evolved, its Mega Energy will deplete over time. Unlike Candy, each individual type of Mega Energy has a limit of 2000 in Trainer collection.

Mega Energy for a particular species can be received by battling that specific Pokémon in Mega Raids, a special Tier of Raid Battles, or completing Research tasks. Completing a Mega Raid in a shorter time would award more Mega Energy, which is given upon completion of the raid and does not require a catch.

Buddy Pokémon can earn corresponding 5 Mega Energy per km via walking (along with the usual Candy) if it is part of previously a Mega-Evolved Pokémon's Evolutionary line. For example, if a Trainer had registered Mega Venusaur in their Pokédex, any Bulbasaur, Ivysaur and Venusaur can earn Mega Energy when assigned as Buddy Pokémon.

Mega Evolving a Pokémon for the first time costs a high amount of Mega Energy. Mega Evolving that single Pokémon subsequent times do not require Mega Energy again, if its rest period is over. Mega Energy can be used to skip the rest period. Mega Evolving other Pokémon of the same species still requires full cost. Pokémon like Charizard have two Mega forms, both of them require to be unlocked at full cost first.

Mega Pokémon boost the attack power of all other Pokémon when battling in Raid Battles by 10%. Attacks that share their type with the Mega Pokémon's type(s) receive a 30% boost. However, these bonuses do not stack if there are multiple Mega-Evolved Pokémon battling simultaneously, only the higher will be applied.

While a Pokémon Mega Evolved, the Trainer gain bonus Candy for catching Pokémon that share a type with the Mega Evolved Pokémon, or for any raid boss caught. These do not stack with each other.

If a Pokémon that has previously been Mega Evolved is traded, their Mega Level is reset, and that Pokémon is considered to have never Mega Evolved at all. 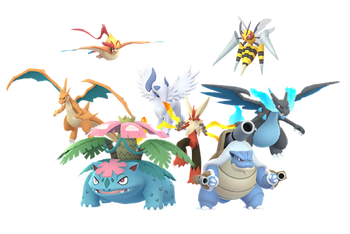 There are currently 21 Mega-Evolved forms released

The following Mega Pokémon have not been released in Pokémon GO.

The following Pokémon are capable of Mega Evolve in the main game series, but their data about Mega Evolution has not been added in Pokémon GO.

The following Mega Pokémon have not been released in Pokémon GO.

The following Pokémon are capable of Mega Evolve in the main game series, but their data about Mega Evolution has not been added in Pokémon GO.

Despite being highly-anticipated by the community, Mega Evolution caused a public backlash regarding its implementation. A Reddit post criticizing Mega Evolution received over 8000 upvotes and 100 rewards within the launch day. Many have pointed out the duration of Mega Evolution is not worth the Raid Passes spent on collecting Mega Energy. The difficulty of Mega Evolving one's desired species is also in concern due to specific Mega Energy and the rarity of Mega Raid Battles.

Since there is specific Mega Raid Bosses pool, there would be no way to Mega Evolve any Pokémon that has its Mega Evolved form released but is no longer available in Mega Raids. Initially, once all Beedrill Mega Energy from A Mega Discovery was used, there was no possibility to continue on Mega Evolving Beedrill for a longer time period.

Outside of Mega Evolution, replacing team contribution with speed bonus does harm to Premier Balls in Tier 5 Raid Bosses. It is impossible to defeat certain Legendary Pokémon in a short time, even for large group, while having more Trainers mean lowering the damage bonus.

Regarding to this, Niantic has made a statement "We are actively listening to your feedback and look forward to sharing more about how this feature will grow in the future." in the Pokémon GO official Twitter page.

On September 3rd, 2020, several updates were made after listening to feedback. The Mega Evolution cost of subsequent Mega Evolution was reduced from 25% of the original cost to only 20%. Amount of Mega Energy given from Mega Raids was increased.[1] Niantic also announced that they are working on implementing features which would allow Trainers to obtain Mega Energy in more ways.

On October 15th, 2020, the duration of Mega-Evolved form has doubled from four hours to eight hours. The cap of each individual type of Mega Energy has increased from 999 to 2000.[2]

On April 29th, 2022, along with A Mega Moment, a multitude of changes for Mega Evolution were implemented.[4][5] 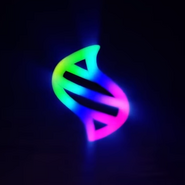 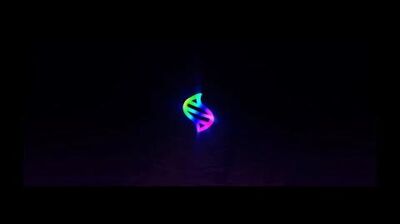 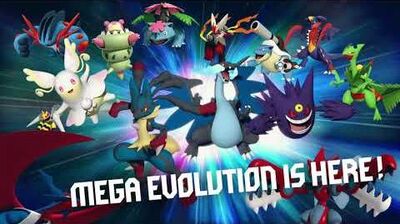 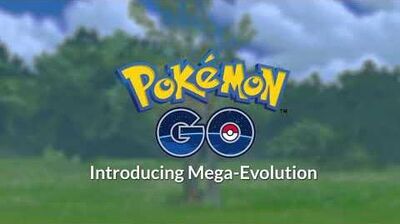