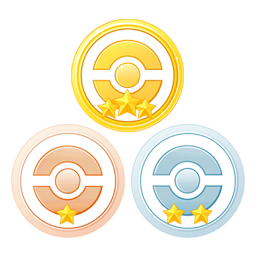 Medals are achievements Trainers earn for reaching certain milestones such as distance walked, PokéStops visited, and Pokémon caught. A Trainer's medals are shown on their profile page.

Each medal has three levels: bronze, silver, and gold. Some medals award Trainers with extra bonuses when they are earned, such as an increased chance of successfully catching certain Pokémon types or unlocking wardrobe pieces for purchase.

When the player earns a medal, an animated pop-up displays in the Map View, similar to the one when a Trainer levels up.

After achieving gold level of each medal the statistics of required task for such medal are still kept and can be seen in medal's detail view in gold-level medal tab.

Medals have three different levels that in order to be achieved, require various values for a main task of certain medal.

Gold-level medal
Add a photo to this gallery

Medal images used above are original graphics used for medals for catching Pokémon of specific-type. After game update to version 0.41.2, they were changed to have icons of corresponding type, therefore these images became unused in the game.

Medals have to kinds the ones for the various general tasks and milestones in gameplay and the others for catching specific-type Pokémon.

First section with medals on Trainer profile page shows all the currently owned medals for various milestones of general actions in the game. They can be also related to combat, number of each region Pokédex entries and catching specific Pokémon.

Besides the general medals for certain milestones, there are also medals for catching specific-type Pokémon. These medals share same task and value of achieving next level of medal:

Bronze, Silver and Gold specific-type Pokémon medals increase 10%, 20% and 30% the capture rate of Pokémon from that Specific-type, respectively.

These medals are exclusive and were only obtainable during their event.

There are exclusive medals for Ticketed Special Researches, including:

These medals are inscribed with a 4 digit month-year label.

For acquiring certain medals, mainly specific-type Pokémon related medals, there are some bonus rewards on each achieved level of such medal.

Medals for catching specific-type Pokémon grant trainers having them with special catch bonus that highers capture rate of all Pokémon of respective type when it is being captured in wild.

This counts only for capturing Pokémon with type corresponding to the medal. (for instance the Dragon Tamer medal grants a bonus for catching

). If a Pokémon has two types, the game will average the catch bonus trainer has for those two types.

Twelve medals for general actions grant trainers having them with special avatar items themed for each name of medal. These medals are:

Jogger and Fisher unlock only-male avatar clothes when Battle Girl unlocks only-female avatar clothes, therefore depending on which gender of avatar is currently chosen these wardrobe pieces are displayed in rewards section of medal in its detail view. Thus, if avatar is male there are no rewards for Battle Girl medal and if avatar is female there are no displayed rewards for Fisher nor Jogger medals.

Tiers of Purifier and Hero medals count towards the number of bonus Premier Balls given in Shadow Pokémon rescue mission.

Retrieved from "https://pokemongo.fandom.com/wiki/Medals?oldid=81800"
Community content is available under CC-BY-SA unless otherwise noted.