Yes
Machamp is a Fighting-type Pokémon from the Kanto region. It evolves from Machoke after being fed 100 candies or with no candy cost if traded. Machamp is the final evolution of Machop.

Superpower Pokémon
Machamp has the power to hurl anything aside. However, trying to do any work requiring care and dexterity causes its arms to get tangled. This Pokémon tends to leap into action before it thinks.
► - Machamp's cry

Machamp is part of a three-member family. 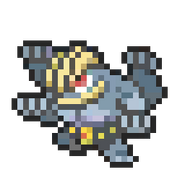