No
Lunatone is a Rock, Psychic-type region-exclusive Pokémon from the Hoenn region. It does not evolve into or from any other Pokémon.

Meteorite Pokémon
Lunatone was discovered at a location where a meteoroid fell. As a result, some people theorize that this Pokémon came from space. However, no one has been able to prove this theory so far.
► - Lunatone's cry

Lunatone is part of a one-member family. 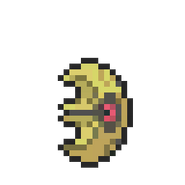