Yes
Lapras is a Water, Ice-type Pokémon from the Kanto region. It does not evolve into or from any other Pokémon.

Transport Pokémon
People have driven Lapras almost to the point of extinction. In the evenings, this Pokémon is said to sing plaintively as it seeks what few others of its kind still remain.
► - Lapras's cry

Lapras is part of a one-member family. 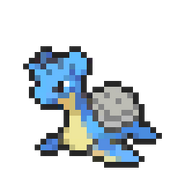