Jessie and James can be both encountered at the same time when Trainer finds and interacts with the Meowth Balloon. Similarly to regular Team GO Rocket Balloon, Meowth Balloon can spawn one at the time above the Trainer's avatar in the Map View, however Meowth Balloons are rarer. You do not need a Rocket Radar to encounter them.

Jessie and James returned in Secrets of the Jungle Event 2020. They guide the Trainer in the Special Research Distracted by Something Shiny. They have left the game on February 28th 2021.

Jessie and James returned in the Secrets of the Jungle Event 2021 and left the game on October 15th 2021.

Battle with Jessie and James is similar to battle with any other Grunt from GO Rocket Balloon, however both of them can be fought from the same Meowth Balloon. Right after defeating Jessie, player can engage battle with James.

Similar to regular Grunts, they do not use shields, defeating them counts (as two Grunts) towards the Hero medal and Research tasks and awards two Mysterious Components. However, like Team GO Rocket Leaders, their Shadow Pokémon can be shiny in the encounter.

Pokémon highlighted with green can be caught after winning a battle.

Before their first return, Jessie and James had different Pokémon.

Pokémon highlighted with green can be caught after winning a battle. 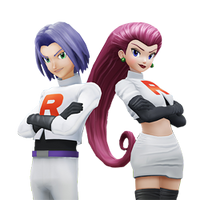 Jessie:
"To protect the world from devastation!"
James:
"To unite all people within our nation!"

Jessie:
"To denounce the evils of truth and love!"
James:
"To extend our reach to the stars above!"

Jessie:
"Looks like I’ve just denounced the evils of truth and love!"
"Can’t wait for the Boss to hear about this!"
"Team GO Rocket’s first take-over would’ve been much more successful if only we’d been invited!"
James:
"Looks like our reach has extended to the stars above!"
"I hope the Boss will be proud of me!"
"If only the Boss had sent us here the first time around!"

Jessie:
"You’re just a Twerp. Why are you so strong?"
"Hmph! How infuriating! Don’t let it go to your head just because your Pokémon were a teeny-tiny bit stronger!"
"We’re blasting off again!"
"I only lost because I’m using these borrowed Pokémon! You’re no match for Team Rocket!"
James:
"We got beat by a Twerp?!"
"But I was so confident this time!"
"Even if you did defeat us in battle, we’re still bigger and stronger than you!"
"We’re blasting off again!"
"Argh! I despise Twerps!"
"I should have known I couldn’t win with borrowed Pokémon..."