In the game, there are many Items that are related with capturing, hatching, evolution and battling Pokémon. Most of them can be obtained from Photo Discs in PokéStops and Gyms. Trainers can be also rewarded with items for levelling up, winning Raid Battles, completing Research tasks, participating in GO Battle League matches or battling Team GO Rocket members.

To enter to the page with all owned items in game:

Most of items available in game is contained in Trainer's Item Bag, but there are some of them like Premiere Ball or purchasable storage upgrades which technically are items but they are not contained in the bag throughout regular gameplay.

Trainer begins their journey with a Bag capacity of 350 items (practically 348 – as there are also a Camera and Infinite Incubator). The amount of items that can be carried can be increased by 50 by purchasing the Bag Upgrade from the Shop for

200. Bag capacity can be increased up to a maximum capacity of 5,100 item slots.

After reaching Item Bag space limit, player is not able to spin Photo Disc in a PokéStop or a Gym for more items and instead they get information that "Bag is full". All items except Unlimited Incubator, Camera, the free Raid Pass, Mystery Box and purchased Tickets are possible to be permanently removed from the Item Bag in any quantity.

However, Items received from Raid Battles and Research tasks or for achieving next Trainer level are added to the Item Bag regardless of exceeded space limit.

Poké Balls are items that are critical to a Trainer's quest, used for catching and storing Pokémon. Currently Poké Balls can be obtained through several different ways such as: spinning Photo Discs at Gyms and PokéStops, being rewarded for leveling up, completing research tasks, opening gifts or purchasing them in Shop (in this case only regular ones).

Potions are items that can restore Pokémon's HP that is a medicine used to heal an injured Pokémon. They can be acquired from leveling up, spinning the Photo Disc at a Gym or PokéStop, defeating a Raid Boss, completing research tasks, or opening gifts.

There are currently four types of potion:

Revives are items that allows Trainer to restore health of fainted Pokémon. It works only on Pokémon that HP is equal 0. They can be acquired from leveling up, spinning the Photo Disc at a Gym or PokéStop, defeating a Raid Boss, completing research tasks, or opening gifts.

There are currently two types of revives:

Berries are items that can be acquired from leveling up, spinning the Photo Disc at a Gym or PokéStop, defeating a Raid Boss, completing research tasks, or opening gifts. They can be used while capturing wild Pokémon and to feed them in Gym.

Evolution Items are items used to evolve certain species of Pokémon. There is small chance that Johto Evolution Items can be obtained from spinning Photo Disc PokéStops and trainer is guaranteed one on their seventh day spin streak. They can be also obtained as a reward from Research tasks and gifts while Sinnoh Stone can only be obtained in Research Breakthrough and Trainer Battle.

There are currently seven items that can be obtained, that are:

Egg Incubators are items used to hatch Pokémon Eggs. In order to hatch them, a player must place an Egg in the Incubator. The distance for an Egg in Incubator is tracked only when the game is open.

There are three types of Incubators:

Raid Passes and Battle Passes are items that can be acquired by spinning the Photo Disc at a Gym. They are used by trainers to participate in Raid Battles.

There are three types of these passes:

Premium Battle Pass can be used in both Raid Battles and to battle in Premium rewards set of GO Battle League.

Technical Machines (TMs for short) are items you can use to permanently teach a Pokémon a new random Fast Attack or Charged Attack.

They can be only obtained as a reward from Raid Battles, Research tasks and GO Battle League rewards.

A Gift is an item that can be sent to another Trainer. Gifts contain items that are of higher value than what Trainers normally obtain from spinning PokéStops, supporting the feeling that your friends are really helping you make the best of your Pokémon GO journey.[2] Only one gift can be sent to each Friend per day and at most 20 Gifts that can be opened in a single day. Trainers may have up to 20 Gifts in their Item Bag at any given time and they do not take up any space.

There are two kinds of gifts — regular and sponsored.

A Lucky Egg is an item that doubles gained XP for 30 minutes. After activating a Lucky Egg, its effect lasts whether the player is online or offline.

This item cannot be obtained from a PokéStop itself. However, it can be received by reaching certain levels, or by purchasing it from the Shop for

80. A bundle containing eight Lucky Eggs can be purchased for

500 as well. It can be also rewarded for completing set of Special Research tasks.

A Star Piece is an item that awards 50% more Stardust for 30 minutes. After activating a Star Piece, its effect lasts whether the player is online or offline.

This item cannot be obtained from a PokéStop itself. However, it can be received by purchasing it from the Shop. Bundles containing eight and 25 Star Pieces can be purchased as well. It can be also rewarded for completing set of Special Research tasks.

Lure Modules are items that Trainer can use on PokéStop to attract more wild Pokémon to appear near it. Unlike Incense, everyone can catch the attract Pokémon. There are also three advanced Lure Modules kinds that also cause certain Pokémon to evolve:

These items cannot be obtained from a PokéStop itself. However all types of Lure Modules can be purchased from the in-game Shop.

Incense is an item that makes Pokémon spawn nearby player.

Incense, when activated, shows a pinkish aura around the Trainer for 60 minutes. The effect will follow a Trainer if they continue to travel, though part of the appeal is being able to keep catching while remaining in one place. Pokémon lured by the Incense will also have a pink aura. Spawns are based on the local biome the player is in.

Mystery Box is a special kind of Incense which is a mysterious old box that Trainers can receive upon transferring first Pokémon to Pokémon Let's Go for the Nintendo Switch.

Opening it releases a scent which attracts Meltan for 60 minutes. Once the box has been activated, the Trainer must wait 3 days to transfer Pokémon and re-unlock the box.

Rare Candy is an item that, when used on a Pokémon, turns into that Pokémon species' Candy. It can be used at any time of gameplay just like a potion. It also shares same interface as the one for healing Pokémon with potions.

It can be only obtained as a reward from Raid Battle, Research tasks, and Trainer Battle.

GO Beyond introduced Rare Candy XL. It functions the same except converting into Candy XL instead of regular Candy.

In-game description
The Rare Candy can transform into Candy for any Pokémon. For example: when used on a Pikachu, one Rare Candy turns into one Pikachu Candy.

The Camera is a special item that all Trainers obtain at the very beginning of their journey with Pokémon GO.

The Camera is an item given to player automatically. It is essentially an easier way to take screenshots on player's mobile device - and when capturing a Pokémon, you can tap the camera icon to easily take a picture within the app. The screenshots/pictures of Pokémon encounter made in-game adds player's name in the bottom corner of the picture. It cannot be removed from bag and it takes up one slot.

Camera item allows to access the GO Snapshot feature that allows Trainers to take photos of Pokémon from their collection at any time.

In-game description
A device to capture photos of Pokémon. Photos can be shared with others.

Original Description
When you encounter Pokémon in the wild, you can use your camera to photograph them.

A Team Medallion is available for purchased for

1,000 from the Shop. The item allows a Trainer to switch to another Team, but they will not be able to change for another year.[3]

In-game description
A unique coin that enables a Trainer to change teams. It can only be purchased from the shop once per 365 days.

Tickets are items that grant a Trainer access to special features during particular in-game event, mainly Special Research campaigns. They happen to be available for purchase from the Shop using real-life currency, before and during the specific events. Currently there are two different designs of event these tickets: pink and navy-blue. 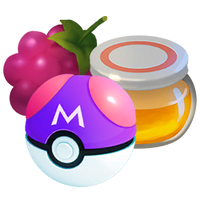 There are several items in the game that are either not used, not obtainable or not fully implemented, such items are: