Houndoom is a Dark, Fire-type Pokémon from the Johto region. It evolves from Houndour after being fed 50 candies. It can Mega Evolve into Mega Houndoom initially after being given 200 Mega Energy, and 40 afterwards.

Houndoom is part of a two-member family. 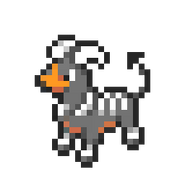 Listings
List of Pokémon (by release date • by Pokédex data • by statistics • by evolution family • by gender ratio) • Pokémon with different forms • Pokémon with gender differences • List of Shiny Pokémon (Comparison)
Retrieved from "https://pokemongo.fandom.com/wiki/Houndoom?oldid=95582"
Community content is available under CC-BY-SA unless otherwise noted.