Gyarados is a Water, Flying-type Pokémon from the Kanto region. It evolves from Magikarp after being fed 400 candies. It can Mega Evolve into Mega Gyarados initially after being given 200 Mega Energy, and 40 afterwards.

Atrocious Pokémon
Standard Pokédex description
When Magikarp evolves into Gyarados, its brain cells undergo a structural transformation. It is said that this transformation is to blame for this Pokémon's wildly violent nature.
► - Gyarados's cry
Mega Gyarados Pokédex description
It zooms out of the water at Mach speeds. Even large ships caught in its path are split cleanly in two.
► - Mega Gyarados's cry

Gyarados is part of a two-member family. 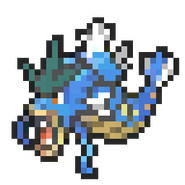 Listings
List of Pokémon (by release date • by Pokédex data • by statistics • by evolution family • by gender ratio) • Pokémon with different forms • Pokémon with gender differences • List of Shiny Pokémon (Comparison)
Retrieved from "https://pokemongo.fandom.com/wiki/Gyarados?oldid=96146"
Community content is available under CC-BY-SA unless otherwise noted.