The Global Catch Challenge was a week-long event that began in late November 2017. The event concluded with a special celebration at the Pokémon GO Safari Zone event in Tottori, Japan, on November 26.[1]

All unlocked rewards were available until December 1, 2017.[2]

The following offers were available from the shop from the start of the event until December 11th, 2017.[3][4]

200, which was not normally possible prior the event. 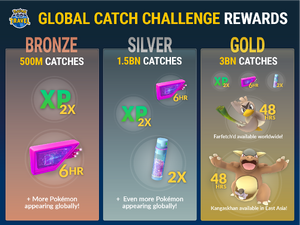 Retrieved from "https://pokemongo.fandom.com/wiki/Global_Catch_Challenge?oldid=82594"
Community content is available under CC-BY-SA unless otherwise noted.