Gengar is a Ghost, Poison-type Pokémon from the Kanto region. It evolves from Haunter after being fed 100 candies or with no candy cost if traded. Gengar is the final evolution of Gastly. It can Mega Evolve into Mega Gengar initially after being given 200 Mega Energy, and 40 afterwards.

Shadow Pokémon
Standard Pokédex description
Sometimes, on a dark night, your shadow thrown by a streetlight will suddenly and startlingly overtake you. It is actually a Gengar running past you, pretending to be your shadow.
► - Gengar's cry
Mega Gengar Pokédex description
Mega Evolution has made it possible for Gengar to access other dimensions. Its entire body is brimming with strange power.
► - Mega Gengar's cry

Gengar is part of a three-member family.

These costumed Gengar's Mega Evolutions do not retain their costumes. 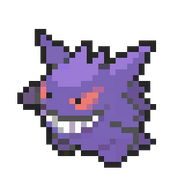 Listings
List of Pokémon (by release date • by Pokédex data • by statistics • by evolution family • by gender ratio) • Pokémon with different forms • Pokémon with gender differences • List of Shiny Pokémon (Comparison)
Retrieved from "https://pokemongo.fandom.com/wiki/Gengar?oldid=95792"
Community content is available under CC-BY-SA unless otherwise noted.