GO Battle League is a feature in Pokémon GO that allows trainers to battle opponents around the globe in online Trainer Battles. The feature was released on January 29th, 2020.[1] It is only available to Trainers level 10 and up. Only one Pokémon of a single species can be assigned to a Battle Party.

and tap the Battle button

Since April 10th, 2020, the GO Battle League leaderboard was introduced to show the top five hundred Trainers in the world.[2]

GO Battle League is currently at Interlude Season. The formats are:

For the leagues and cups in the current season, see Interlude Season → Formats.

GO Battle League uses a similar Battle Leagues mechanic as seen in normal Trainer Battles. The Leagues have the Remix and Classic variants. Remix bans the most popular Pokémon decided by officials. Classic only allows the Pokémon that have not been powered up by Candy XL. Special Battle Leagues, called Cups, are also featured at certain times.

The following is a list of all leagues and cups featured in the GO Battle League:

For the ranks and ratings in the current season, see Interlude Season → Ranks and Ratings.

A Trainer's rank is a measure of their progress in the current GO Battle League season. The requirements to reach the next rank depend on the Trainer's current rank but usually involve completing or winning a total number of matches. Once a Trainer reaches a new rank, they cannot drop below it for the rest of the season; losing matches does not lower a Trainer's rank. Ending a season with a higher rank results in a higher amount of Stardust at the end of the season, and certain rewards are locked behind the highest ranks.

For the rewards in the current season, see Interlude Season → Rewards.

At the start of each set of matches, Trainers need to pick the rewards they'll receive from that set: Basic Rewards, which are free, or Premium Rewards, which require exchanging a Premium Battle Pass. The next match reward in the set is only granted if the Trainer wins the next match. These rewards include Pokémon encounters, Stardust, Rare Candy, and a random item which awards one of the following:

The exact specifics on rewards are different for each season. The amount of Stardust and Rare Candy, and the order of the rewards, depends on which reward set the Trainer chose and the Trainer's rank. Reaching the highest rank often rewards Trainers with other exclusive items such as avatar items and poses. At the end of each season, Trainers receive Stardust and, if their rank was high enough, an Elite Fast TM and/or an Elite Charged TM.

According to Niantic, battling has been a core part of the Pokémon universe since the very beginning. This feature would build upon Trainer Battles, then-current form of player vs. player battling that exists within Pokémon GO. Like many Pokémon GO features, GO Battle League would encourage players to get out and explore the world with Pokémon. Trainers would be able to walk in order to earn entry into the GO Battle League, then battle opponents from around the globe through an online matching system and rise in the ranks of the league. Niantic hoped this feature "will make the Pokémon GO battling experience more competitive and accessible to more Trainers."[3]

Until March 13th, 2020, entering the GO Battle League required unlocking each set. The first set was free, but following sets had to be unlocked by walking 3 km for each set. If a Trainer did not want to walk, a Battle Now button was displayed which allowed Trainers to unlock the next set by spending

50 if the walking distance remaining was greater than 2 km, greater than 1 km, or less than 1 km, respectively. Progress was displayed on the Battle page, and Trainers could accumulate distance for a future set after playing the maximum five sets. When the COVID-19 pandemic began, the walking distance requirement was removed to allow Trainers to participate in the GO Battle League without having to go outside.[4] The removal was intended to be temporary. A week before Season 7 began, Niantic announced the removal would be permanent and the walking requirement would not return.[5]

With different seasons of GO Battle League, there were significant changes to this feature including Pokémon rewards pool and moving Pokémon encounter reward into third place in the free set. Legendary and Mythical Pokémon may sometimes appear in rewards pool.

Starting from Season 6, the GO Battle League has expanded from 10 to 24 ranks, with the top four ranks called Ace, Veteran, Expert and Legend. Rewards are tied to the theme of the Season as well. 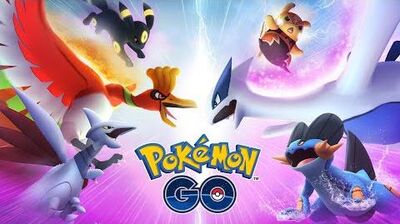