Yes (Disguised as other Pokémon)

No
Ditto is a Normal-type Pokémon from the Kanto region. It does not evolve into or from any other Pokémon.

Ditto is part of a one-member family.

Ditto cannot be seen in the map view, because it disguises itself as another Pokémon in their normal form (not Shiny). Ditto will only reveal itself once it has been successfully captured and it may be normal or Shiny.

Currently, the following Pokémon in the wild can be a Ditto in disguise: 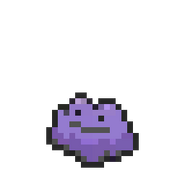