Buddy Pokémon is a game mechanic that allows trainer to choose a Pokémon from their collection that after walking certain distances will reward trainer with specific candy.[1]

The chosen Pokémon will appear next to its trainer's avatar on the profile screen. The Buddy will be able to be swapped out with another Pokémon at any time, 20 times per day. A Buddy cannot be assigned to a Gym nor transferred.

An elevated experience Buddy Adventure was introduced on December 18th, 2019. Trainers can play with their Buddy and increase their Buddy Level.[2]

Each Pokémon that is assigned as Buddy has specific amount of kilometers to be walked after which trainer is rewarded with a candy. There are currently four different distances to be walked for a candy reward:

You can see a list of all Pokémon sorted into the candy distance categories here: Buddy Pokémon rewards.

Additionally, distance requirements are halved when the Buddy Pokémon is Excited (See Readable Mood below for more information).

Once a Trainer reaches level 40, their Buddy Pokémon have a chance to find a candy XL every time it finds a candy. The odds of a Buddy Pokémon finding a candy XL increase with the level of the Pokémon.

If the Buddy Pokémon belongs to a family with a Mega Evolution that has been performed previously (registered in the Pokédex), it will also find 5 Mega Energy in addition to candy rewards. (For example, any Charmander can earn Mega Energy as long as the trainer has Mega Evolved any Charizard.)

Every Pokémon has its specific type of Buddy Pokémon that defines where it is placed relatively to Trainer's avatar on the profile screen. There are five Buddy size types:

You can see a list of all Pokémon sorted into the Buddy Type categories here: Buddy Pokémon types.

Buddy Adventure is a name of revamped Buddy Pokémon featured that expands initial feature with more mechanics and perks to it than just assigning buddy and finding candy.

To select a Pokémon as a Buddy Pokémon for the first time, Trainer needs to:

After selecting, the first Buddy Pokémon, it cannot be removed but only swapped with another Pokémon.

Once Trainer selected a Pokémon as their Buddy, they can access their Buddy Profile screen in two ways:

To swap out Buddy Pokémon, Trainer needs to:

Trainers can only swap out their Buddy Pokémon 20 times per day.

Engaging in Activities allows a temporary increase of Buddy Pokémon's mood and rewards Affection Hearts. The Today's Activities in the Buddy profile screen lists each way to interact with Buddy. Each time trainers engage in a listed activity with their buddy, the hearts will turn from gray to pink, indicating a heart was earned in that category.

When Buddy's Mood is Excited, the Affection Hearts that could be earned are doubled, except for the Bonus category. Extra earned Affection Hearts remain even if the Buddy is no longer excited.

Already obtained hearts will not be doubled, and the base set of hearts is filled in first. For example, if a snapshot was already taken before, it will require another snapshot to earn the bonus heart. If that is not the case, only one snapshot will be needed to earn both hearts at once.

There are following types of Buddy Activities:

Walk together
Buddy Pokémon will appear when hunger meter is full until it is fully depleted. One Affection Heart is earned for each 2 km walked with a Buddy walking on the map.
Progress on this activity is reset when swapping buddies or when the daily reset occurs.

Play together
Playing with Buddy in AR mode until the light flare and heart bubbles are seen from the buddy.

Battle together
Using the Buddy in a Battle Party when battling in Gyms, Raid Battles, Trainer Battles, Training, or against Team GO Rocket. (It does not have to be active in the battle, nor do you have to win; it only has to be in the party.)
When battling in a Gym, each separate Pokemon defeated counts individually.

Take a snapshot
Taking a photo of the Buddy.

Visit a new place
Visiting a Gym or a new PokéStop

Bonus
There are three possible Bonus Hearts, which are earned only once each per day when your Buddy gives either a present or souvenir or Trainers visit a PokéStop or Gym that your Buddy wants to visit. This activity is not visible until receiving an Affection Heart on this category. Also, this category is not affected by the Excited state, so you can only earn up to three hearts (one for each Bonus), not six.

To play with Buddy Pokémon, player needs to tap on Play! button below the Buddy's display in its profile page.

Playing with Buddy Pokémon requires a device camera permission given to the game app.

There are several gestures that can be used in this mode:

Playing with Buddy feature also allows Trainer to take a snapshot the Buddy Pokémon, feeding it with Berries or Poffin or open gifts.

Buddy can be fed from the same screen that the Playing with Buddy feature uses but can be also done by tapping onto Berry icon above the Buddy Pokémon display in its profile page.

There is also an option of Quick Treat when the AR mode message is displayed before entering the feature. This option allows players who use AR+ to quickly feed Pokémon without finding a flat surface to summon it first. However, this option is only available when the hunger meter is empty.

Poffins are special items which are food exclusive for Buddy Pokémon as they cannot be fed to wild Pokémon while catching them. When a single Poffin is given to Buddy Pokémon its Hunger Meter is completely filled up, it gets instantly Excited (unlocking the ability to earn double the Hearts of all non-Bonus categories for the duration of its effect), and instantly earns all six hearts for feeding your buddy a treat.

Obtaining Poffins is also more limited, as it is available either from in-game shop, a possible reward from AR Mapping Field Research tasks, or from Special Research series (such as ticketed Community Day Special Research task series, which always reward Trainer with one Poffin).

Unlike Buddy’s Mood, Buddy Levels do not decrease over time, much like Friendship Levels.

Buddy will appear on the Map when it is fed enough and their hunger meter is full. While on the Map, buddy will earn Candy at a reduced walking distance.

Interacting with Buddy improves their Mood. It decreases over time. Swapping buddies reset it back to Normal. Excited is the most positive mood, which doubles the Affection Hearts that could be earned and the candy walking distance is halved when excited.

Once Buddy achieves Good Buddy level, the Mood indicator appears on the Buddy Profile screen. If Buddy is on the map, Trainer can also tap their buddy to see its Mood.

When Buddy Pokémon reaches Great Buddy level it can occasionally bring Trainer a present which are items inside of floral sack.

To open such present, Trainer has to open Buddy profile page and they will see a sack in front of their Buddy. Once they tap on it, the items will be received. These presents can contain items, such as Poké Balls, Potions, Berries, Revives, and stickers from Gifts.

Upon reaching the Great Buddy level, Buddy will at times help Trainer catch wild Pokémon. Specifically, if a thrown Poké Ball bounces off of wild Pokémon while it attacks, there is a chance that Buddy will partially appear in the Encounter screen and hit the deflected Poké Ball right back at the target.

Along with wild Pokémon, this may also occur while rescuing Shadow Pokémon after successful battle against Team GO Rocket members and even while catching defeated Raid Boss Pokémon, saving the trainer a Premier Ball. 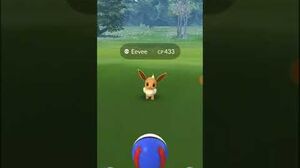 After achieving Ultra Buddy level, Buddy Pokémon can gift Trainer with Souvenirs. The kinds of Souvenirs Buddy will find vary depending on Trainer's local environment, and each Souvenir indicates the location where the Buddy found it. Receiving a Souvenir will grant an Affection heart in the “Bonus” category.

Once Buddy finds the first Souvenir, they can be viewed from the Buddy profile screen, which gains special section with Souvenirs right above Swap Buddy button.

Buddy may draw Trainer's attention to a nearby PokéStop they find interesting. If Trainer visits the PokéStop and spin its Photo Disk while there is an indicator above the PokéStop, Trainer will earn bonus items and an Affection heart in the “Bonus” category.

After achieving Best Buddy level, Pokémon gains a CP Boost, making it more powerful in Raids, Gym Battles, Team GO Rocket, and Trainer Battles. CP Boost is equivalent to CP after two extra Power Ups, if the boosted Buddy Pokémon is at level 40, it will have CP equivalent to level 41. This works for maxed Pokémon, putting a level 40 or 50 Pokémon at level 41 or 51 respectively depending on your level.

The CP Boost will not be applied if the Pokémon is not currently set as Buddy.

Some Best Buddy Ribbons may be not correctly aligned on the Pokémon's body due to a vast variety of Pokémon models.

This feature can be opted out by changing respective setting in the game settings.

Regardless of Buddy level, when a Trainer is low on Gifts in their items bag, their Buddy will occasionally notify them next to the buddy icon with an exclamation point symbol. Once clicked on, the Trainer will receive from 1 to 5 gifts from the closest PokéStops from their current location.

These Gifts do not count toward the 100 daily limit for sending gifts to friends; this only applies to gifts received by spinning PokéStops.

Trainer will not receive Gifts from their Buddy if they already have 10 or more Gifts in their Items Bag. Unlike Buddy presents and Souvenirs, receiving Gifts from Buddy will not reward Affection hearts.

This feature was introduced due to COVID-19 pandemic to allow Trainers obtain Gifts without travelling to PokéStops if they do not have any near their residences.

The following Pokémon require progressing as a Buddy Pokémon to be able to evolve:

The following Pokémon require performing particular tasks while being an active Buddy Pokémon to unlock their evolution, but are not affected by their Buddy Level (beyond earning a single heart to be a Good Buddy to unlock the status as a Buddy). If they are switched for a different Buddy then the progress is not lost but will not be continued until they are set as active Buddy again.

Buddy Squirtle seen on the map 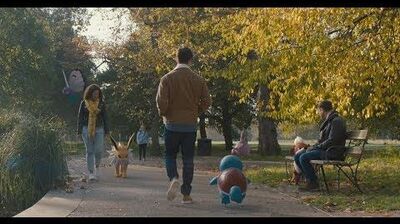