During this anniversary, Trainers were able to capture limited edition Pikachu wearing summer hat and sunglasses. Pichu hatched from Eggs obtained during the time of this event also had this costume as well.

Just like year ago, there was a special Anniversary Box offer in the shop for time of the event.[2] 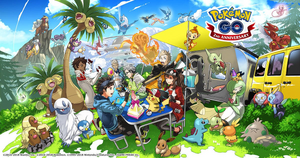