During the event, Trainers were be able to capture limited edition Pikachu adorned with a Pokémon League hat resembling the one worn by Ash Ketchum in the animated series. Pichu hatched from Eggs obtained during the time of this event also had this hat. Additionally, the shop featured an Anniversary Boxes which featured discounted Incubators, Max Revives, Ultra Balls, and Raid Passes.

The following Pokémon were released with the start of the event:

Pikachu had increased spawn rates in the wild (and from Incense, Lure Module):

The following offers were available from the shop from the start of the event. Originally this item bundle was released as the promotional offer for 1st Anniversary. This box was removed on July 22nd, 2017 and replaced with three other bundles for Pokémon GO Fest.[2] 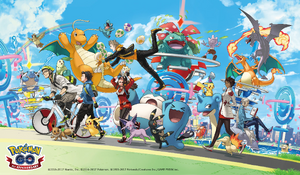