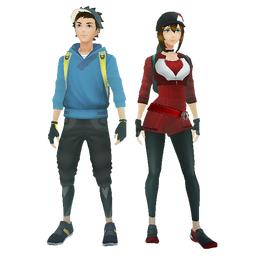 Trainer is a playable character that represents player of the game.

Avatars are models in the game which are a digital representation of a Trainer. Trainer's Avatar is visible on the map as the player moves around, in the defended Gym as the hologram next to deployed Pokémon and in Raid Battle lobby.

An avatar's physical features (hairstyles, skin tones, eye color, and gender) can be changed by touching the face button on the top-right corner of the screen.

There are various apparel and accessory customizations that can be made to a Trainer's avatar. Customization choices include the Trainer's gender, skin complexion, hair color, eye color, hat, glasses, necklaces, tops, bags, gloves, belts, bottoms, socks, and footwear. Appearance can be changed at any time from the Trainer screen by tapping Customize in the menu button on the bottom right.

Many styles are available for free, but some styles can be obtained by exchanging PokéCoins while others can be unlocked reaching new Trainer levels.

During the game, Trainers gain Experience Points (XP or EXP for short) which results in their Levels. Trainer's experience is basically measurement of their progress of gameplay.

Each level requires a certain amount of XP and achieving it rewards Trainer with certain items.

Gym Badges serve as mementos of Trainer's contribution to gyms.

Journal is a game-element that stores recent actions of Trainer. It contains entries with information such as: items received from spun Photo Discs at PokéStops and Gyms, caught Pokémon or Pokémon that returned from defended Gyms.

Medals are sort of achievements that Trainer can receive for doing several tasks. There are two types of medals:

Teams are in-game groups that trainers can join. Players must be at least level 5 to join a team.

Affiliation to team affects only two things during the gameplay: