What's on your mind?

Starly Community day… REALLY?! When everyone is on holiday and has plenty of time they release one of the worst three stage evos. I feel insulted, they know fully well this Pokémon is pure garbage (yes, worse than Trubbish) and it always will be. At least pidgeot and beedrill have some use in pvp and as mega, this one doesn’t.

I really hope for a backlash storm online (#HearUsNiantic) that might change there idea, otherwise I’m probably going to boycott this, no matter the rewards.

July's Community Day is Starly, something that was originally datamined as a choice for 2020, but the poll was never used. Rumors of it were popping up again, but Deino ended up happening for June. https://pokemongolive.com/en/post/communityday-july-2022-starly/

@MVH43 You said you were hoping it is not Starly. RIP

Went to one of my favorite parks with my grandparents and found two Shiny Meltan and a Shiny Pidove (third one, first non-GO Fest one) within 3 minutes! Only my second Meltan Box of the event, but I already found 4.

Went to Disney today and when i was waiting i caught my first ever shiny pikachu!

Dewgong was invisible the entire time it was out and the camera was placed oddly. After Froslass used Shadow Ball, it also immediately went to my Icy Wind instead of buffering for a bit. Possibly because Dewgong's hurt animation never played so it skipped it. I did defeat the Froslass with one health left, but they still had a Crustle who dealt the last bit of damage.

Ok so just now I got my first shiny shadow exeggcute

Invite me if you can

I was looking for shiny Ditto, but this is better!

So I’ve been hunting for a gmax orbeetle raid in sword, and I was looking for 2 days in the wrong den. I go to the right den today, do about 150 purple beam checks, and no luck. Imma try again tomorrow, but can someone tell me the odds of finding? 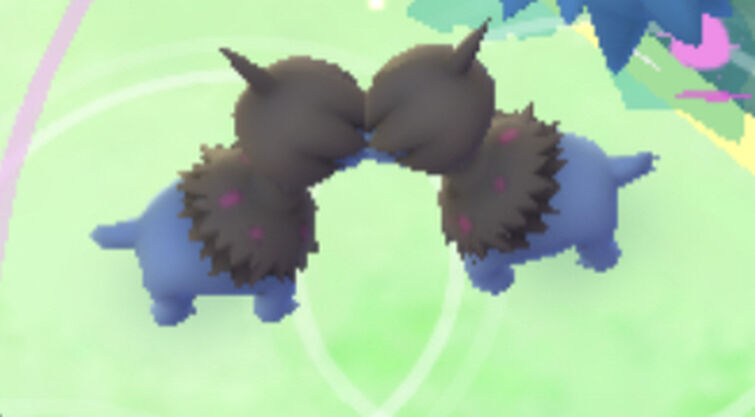 I was stuck in a car from exactly 10 AM until 2 PM when we arrived home. The event of course only ran from 11 AM-2 PM so I had to play using Incense and Deinos kept running away because of the speedlock Niantic put on driving and playing. I also lost three of the five shinies I saw. I was able to save one because the game didn't speedlock it, and another came from a photobomb which apparently are never speedlocked. So I got two shinies. I also got a Shiny Deino last year during GO Fest, so I have three total now and can have a living Shiny dex of the Deino family.

I was able to finish the Special Research pretty easily. Unfortunately the Hydreigon was a 10-10-13. I also evolved four other Hydreigons.

The reason I could evolve so many is I had over 300 candies already from other events. I really only caught about 30 out of the 100 I saw

While the 3 hour period itself, was pretty bad, I had some luck with the eggs.

I had three notable hatches:

And my first Salandit! Male of course, but at least I got the dex entry.

I tried my hand at a Zweilous raid to see how hard they are, and it wasn't worth it. Didn't even make it to the halfway point.

And tonight, I got my first Psystrike Mewtwo of the rotation and reached Ace Rank!

I kinda wish this day was Growlithe day or something that I don't care as much about. But it could have been worse. Gastly day, the day I previously mentioned, I encountered 4 shinies and two ran away as I was in a car traveling back from my condo most of the time.

Maybe I will have better luck during the December recap!

P.S: To put salt on the wound, my cousins and grandparents who were staying with us both arrived back home before us. That means of all the people who wanted to get home asap, I ended up getting stuck waiting the longest and arriving back exactly at 2:00 -_-

Started off the day with shiny wailmer, hatched a hundo pipek, cuaght my first shiny mewtwo. Didn't get as many shiny deinos as I hoped though. Overall this was probably the best day for me in pokemon go.

Because Brutal Swing is so good, I decided to grind hard for Deino Candy and XL Candy. It was 95 Fahrenheit/35 Celsius outside today so it was a little hard to keep going at times but I tried my best to keep walking. However, in-game weather was windy, so I had weather boost the whole time. Also, with my Level 3 Mega Latios, it meant I could get tons more XL Candy.

After 2:00 PM it was much harder to find Deino, but I still got another 200 XL Candy or so. Caught about 1,000 Pokémon in total and walked 12 miles. Didn’t get any hundos unfortunately but I still got some that are good enough to use.

I may have caught… a little too many. And I’m totally out of Pokeballs which isn’t good because I’m trying to grind the TCG event as much as I can.